Bitcoin hit $3,000 earlier this week. Then it dropped by 30%. In honor of that arbitrary high watermark and even higher volatility, I wanted to share the first year of my journey into cryptocurrency.

I first discovered Bitcoin in February 2013.

On a cold winter morning in Menlo Park, a colleague was talking about blockchain this and crypto that. It didn’t make any sense. Miners and block rewards? What? But I remembered seeing a couple headlines on YCombinator’s Hacker News and figured this was something to learn about. So I went on Coinbase, which had just recently launched. I paid $21.65 for 1 bitcoin. Just because. Of course only a few years earlier the price of a bitcoin was infinitesimally small on the order of fractional pennies. 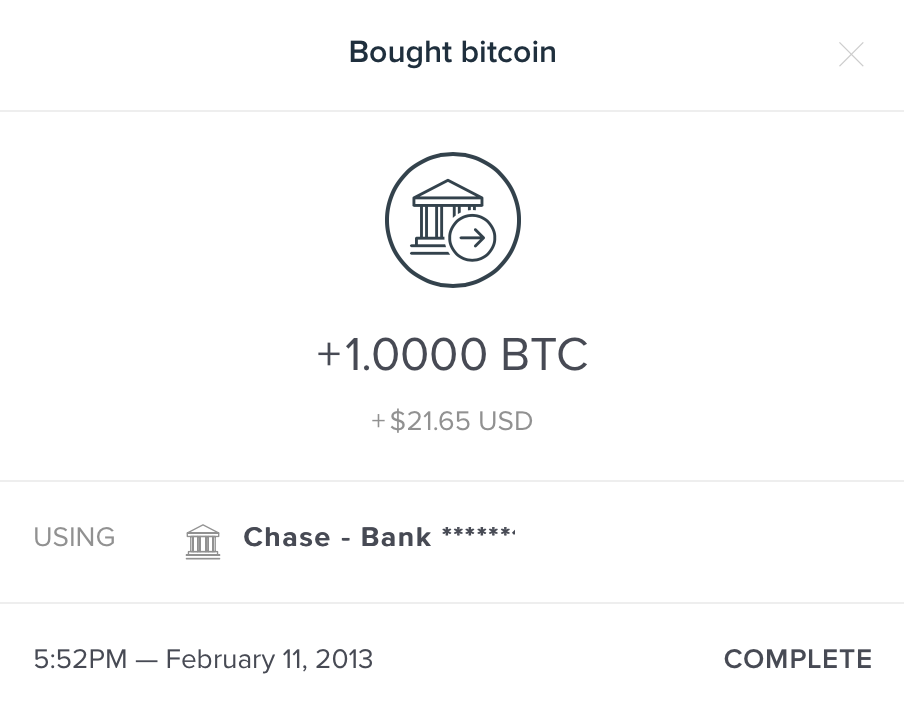 I should have bought more, but even one felt like a crazy idea. It was unclear how or why this existed. I hadn’t thought through how impactful it could be on the future.

What do you do with a Bitcoin?

I heard about these dark web markets. Like the black market version of eBay. So I downloaded an onion browser to check out the dark web and The Silk Road. It felt like eBay on Netscape in 1996. I didn’t buy anything. But I almost bought some alpaca socks. This was one of the first legitimate businesses to open an bitcoin-only e-commerce site. Silk Road was run by someone (or some group) going under the pseudonym Dread Pirate Roberts (DPR) who was arrested later that year just a mile from my house in San Francisco. He was sentenced to life imprisonment.

I also messed around with some tools like Blockchain.info and read the Satoshi whitepaper. Then I read it again. I transferred bitcoin between different online (hot) wallets I had, just because.

I even tried mining bitcoin

I even bought a USB bitcoin miner off Amazon for $14.49 and paid $4.99 for shipping since it wasn’t part of Prime.

My solar power, when it behaves, overproduces. So this was a way to make use of that energy that PG&E gives me pennies on the dollar for. I mined 0.02 bitcoin before the difficulty got so extreme due to competition from huge industrial miners. Within a couple months, I gave up. But at the time, the amount I mined covered the cost of my USB miner. Score.

Plenty of scams; I got gox’d a bitcoin

I did a bit of trading on vircurex and Mt. Gox, two of the earliest exchanges. Vircurex was connected to my mining pool. So it was easy to transfer my measly 0.02 mined bitcoin into it, in addition to the Namecoin tokens that I also mined. I traded these for two Litecoin ($80 USD today) and forgot about the whole thing since other, better exchanges opened up. Luckily I didn’t have too much on Vircurex since it’s all frozen now.

Then came Mt Gox, which has been the grandest of all bitcoin scams to date. MTGOX stands for Magic The Gathering Online Exchange. Magic being the old school Dungeons and Dragons style card game. Mt Gox entered bitcoin trading very early, in 2010. By 2013 it was the dominant exchange for Bitcoin and within a year it was game over a la Madoff. Insolvent to the extent of 7% of all bitcoin, which would be worth $3 billion today. It’s unclear where those coins went or how they’ll get distributed to creditors, who I implicitly became.

Since the company was domiciled in Japan, bankruptcy proceedings have started there. In 2014, I received the following via international air mail. Considering the complexity of an international bankruptcy, it’s been handled pretty well. 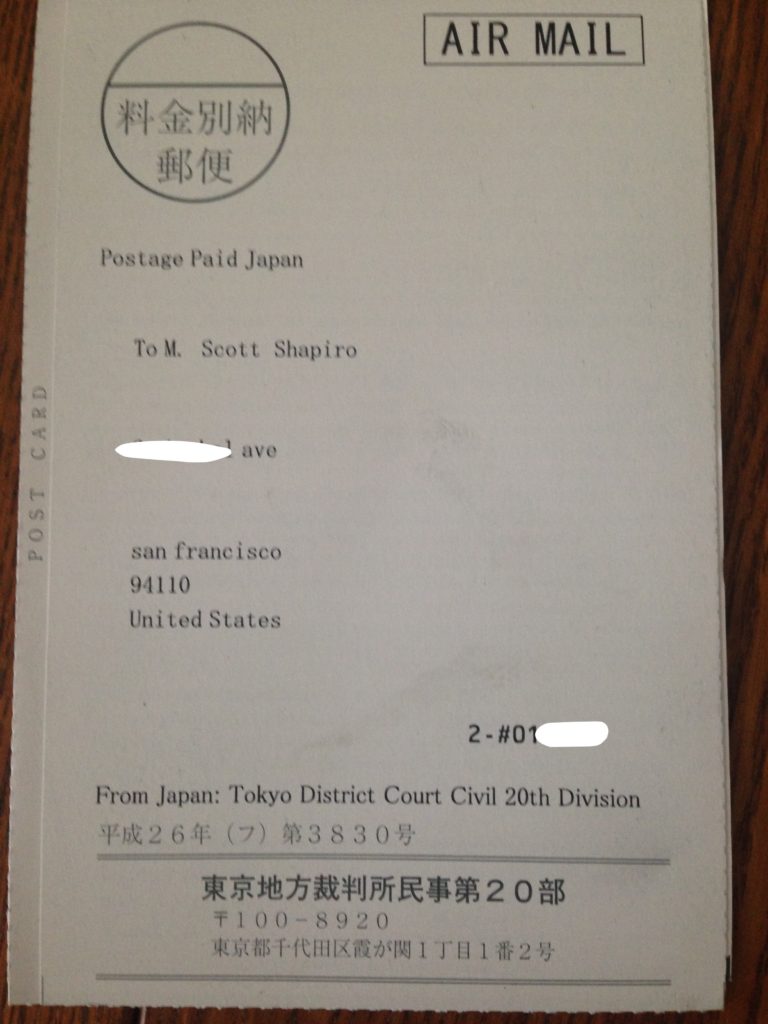 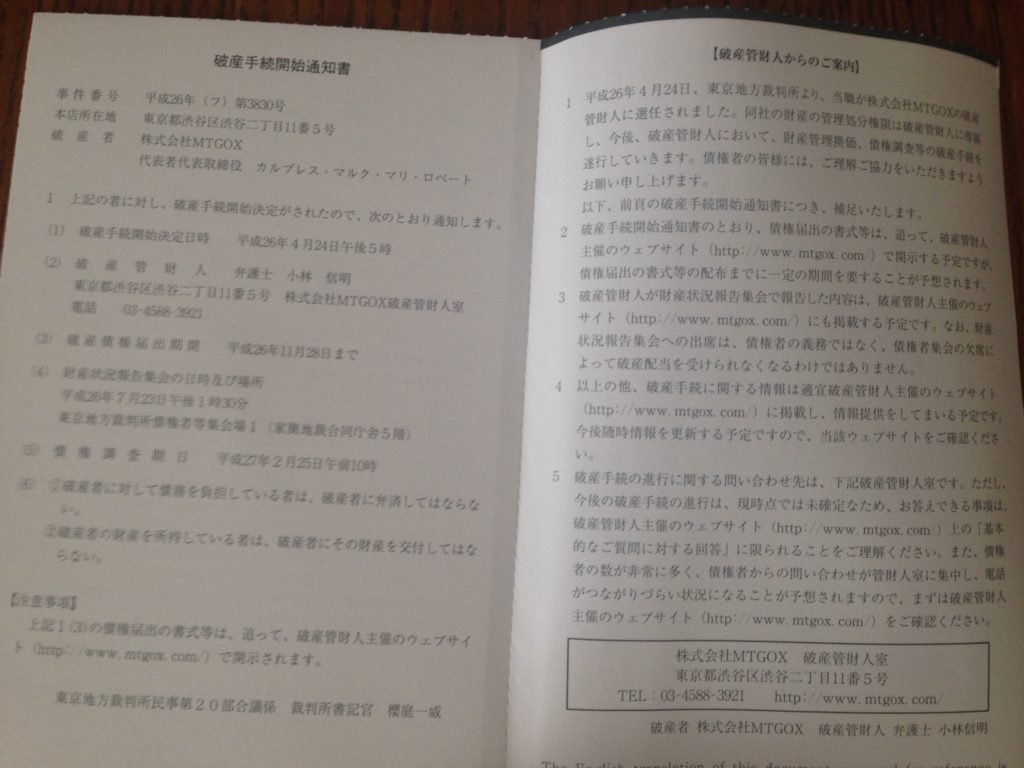 This was a valuable lesson learned. Own your keys or risk forfeit. When your coins are on an exchange, they are in the wallet of the exchange owner who is the only one who has access to they keys. Actually, others might have access to they keys too since hacking is common. A hacker might steal keys. Attacks are constant. The only way to secure ownership is to own the wallet and the private key (think: password) and treat it like cash. This is an unregulated world, very different than banking or stock trading. There’s no FDIC and little scrutiny (though increasing) on the cryptocurrency ecosystem. It’s the wild west and everything you do is at your own risk.

Since then, I’ve studied best practices in securing coins. The best options are to store coins in cold storage and hardware wallets. Just a couple weeks ago, someone lost $8,000 because their Coinbase account got compromised by an SMS 2 factor authentication attack.

Over time, we will see more regulation and improved security on cryptocurrency exchanges. Many have popped up over the past few years, though they are constantly under attacks like denial of service (DOS). And even if they are run by credible, ethical people, they can still suffer outages. This happened last week when bitcoin hit $3,000. Many were upset because they couldn’t login to trade, or move their coins in or out of exchanges. This is new territory and there is no prior on how to build and execute these types of systems. But as we traverse the experience curve (warning: MBA terminology), we’ll see more and more robustness.